My first stop in Costa Rica was Monteverde, a wonderful area of coffee plantations, zip line adventure companies, ecological preserves, rainforest and the worst roads you’ve ever had the mis/fortune to ride on.  The slash there in case you’re a fan of bumping over potholes that could swallow most small cars.

Getting to Monteverde from Liberia is a bit of an exercise in patience and, as we found out, miming.  You see, to take a bus to Monteverde you need to:

That’s pretty much an entire day of being on and off buses.  So when we were approached by a man offering a ride to Tilaran for $60, we…realized he didn’t speak English, and we didn’t speak Spanish.  Much miming and broken sentences in both languages later, we offered $50, and off we went.  We arrived in Tilaran around 9:30, and were again approached by a different man, who offered us a ride to Monteverde for $70.  Again, we found ourselves awkwardly debating the price, and finally we all agreed on (and understood) $60.  So we piled in his car, started off…..and he asked if he could bring his wife.  Turns out, I think (remember, I don’t speak Spanish) he and his wife are from Monteverde and they were going to use the day to visit their family.

Did we get taken?  Most likely.  We could probably have talked both men down more, but honestly….we were tired, and we had the money.

Arriving in Monteverde, we found our hostel, and booked a coffee plantation tour at El Trapiche  – where they grow not only coffee, but also bananas, plantains, sugar cane and pineapples. 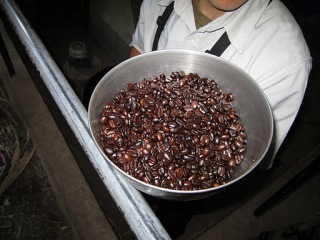 We toured through the bananas and plantains, and then headed into the sugar cane, before getting to the good stuff.  The coffee.  Seeing it in all its stages – how it’s grown, dried, the bean separated from the kernel, and then roasted, was incredibly interesting.

The next day, we headed out to Extremo Park to do a little zip lining.  There are multiple zip line companies in Monteverde, and I think most of them are fairly similar.  Extremo offered a 1km long “superman” zip line – where you fly like superman from one mountain top to another.  It’s a fairly bare bones operation, in that it’s only zip lines (with one 55m repel, and a tarzan swing) and no canopy tour or suspension bridges, which some of the other companies do offer.  While it is bare bones, it doesn’t scimp on safety.

Our final day in Monteverde, we hit the Trainforest (great for kids!), the Serpentarium, and the Ranario butterfly garden and frog pond.  (Although, it’s not really a pond, more of a small frog zoo.)  That evening, we did a night walk in one of the ecological parks near the town.  While we didn’t get to see many  mammals (other than a coati), we did get to view several bird species, and a tarantula. 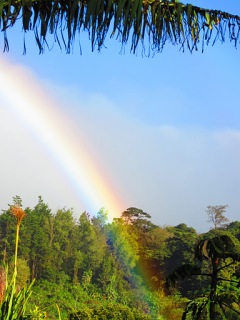 Monteverde is a beautiful area in Costa Rica.  As it is in the clouds, there is occasionally a fine mist in the air.  Blue blue skies above you, a warm mist around, and suddenly…..one of the most vibrate rainbows you’ve ever seen.  Who could pass up a chance to see that?!