I went on a five-day safari, through Tarangire National Park, the Serengeti, and the Ngorongoro Crater immediately after I climbed Kili.  Overall, the safari was a wonderful experience.  The people I was with, on the other hand, were a different matter all together.

I left Moshi at 4:30 in the morning.  The safari had actually started the day before, but of course I was just coming down off the mountain.  Daniel, from Tro-Peaks (the company I did the Kili climb with) picked me up and drove me to the campsite, Zion Campsite, just outside Tarangire National Park.  We arrived just in time for breakfast, and I got to meet my travelling companions for the next five days.

I was with 5 Italians.  If they had been dwarves they would have been: Complainer, Princess, Clubber, Insufferable and Nice.  (Yes, one of them was actually a nice person, the others not so much.)  Of course, the first day I didn’t know this.  But over the next five days, their personalities became very clear.

We set off for Tarangire right after breakfast.  After registering at the gate, the top of land cruiser was popped open, and we began our game drive.  We saw hundreds of elephants within the first half hour.  (We were also charged by an angry elephant within the first half hour.)  Most of the day was filled with different animals sightings – giraffes, zebras, gazelles, impalas, elephants, baboons, even a lion.

Around 5 we headed back to the camp, and the complaining began.  About the food, about the driver, about the campsite, about the stretch of time in the afternoon that we didn’t see any animals.  (As if they can be ordered to appear on demand)

The next day it was off to the Serengeti – a long drive that took us through a few small towns (including a stop for groceries, and to get a fuse fixed so the Italians could charge their phones using a plug in the land cruiser.), and the Ngorongoro Conservation Area.

The Serengti was indescribable. I’ll still try, but it was….one of the spots that you could easily see yourself spending the rest of your life. The light in the morning, when the sun rose was an incredible rosy colour, and at dusk when it was setting, the light seemed to hang in the air. We saw evrything – leopards in trees, more elephants, more lions, cheetahs, zebras, antelopes, a hippo pool. At times the animals were close enough that we didn’t need a zoom – we saw a coalition of cheetahs lazing under a tree on the side of the road; at another time we saw a pride of lions (including an adorable baby) resting under a tree, you guessed, on the side of the road.

At night, you could hear the hyenas as they prowled near the kitchens. Thankfully, they were the only visitors (that I know of) to our camp.

Our final morning in Serengeti we woke early to take an early morning game drive through the park. Then it was back to pack up the landcruiser, and head to the Ngorongoro Crater, after a stop at a Maasai village straddling the Serengeti the Ngorongoro conservation area.

At the NCA, we set up camp at Simba camp, the most popular camp at the top of the crater. It wasn’t hard to see why – with an elephant grazing on trees and bushes behind the mess hall, and a herd of zebras chilling on the grassy plain of the camp site, we had our fair share of wild visitors. 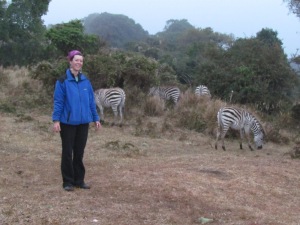 As in our camp in the Serengeti, we had electrical outlets in the mess halls to charge any electronics – phones, camera batteries, or tablets. Very useful for those of us who had spent more time camping with no electricity than in hotels! If only I had brought my chargers with me…

Our final moring we started the drive into the crater. One word of warning to anyone hoping to do a game drive in the crater, it’s cold. Pack several layers of fleece because you will definitely need it. One of the Italians on my trip pulled out her sleeping bag – another solution, but one that leaves you with fewer photo taking options. The Ngorongoro crater was…flat. There were a few trees, but for the most part you could see it stretching out in all directions until it was lost in the early morning haze.

I have to admit that by this point I was a little safaried out. I had seen pretty much every animal there was to see, with two notable exceptions. Servals, a small(ish) wild African cat, and a rhino. There aren’t many rhinos in Ngorongoro – there were 18 in 2001 (statistic found here), and the crater itself is 260 km sq, or 100 sq mi. However, withing a very short time of arriving, our driver suddenly changed directions, and began driving off down the road into a great expanse of green. We all wondered what was going – we had just been watching a mating dance between ostriches, and couldn’t figure out why we had so suddenly taken off. Turns out our driver had either heard news of, or had seen himself, a rhino off in the distance. And there he (she?) was – lumbering away in the distance. The closest we got was maybe 100 metres (maybe 150 – it was hard to judge the distance) but it wasn’t particularly close. With my zoom lens (35x zoom) I got a fairly decent photo.

I never did get to see a serval.