As always, pros and cons (or the tl;dr version) is at the end of the post.

I’ve always said that I didn’t want to go to New York City.  Not because I have anything angainst it, but past experience says I’m going to hate it.

Right before I went to Paris (the first time) everyone said, “Oh my god, Paris!  I loved Paris!  Soooooo amazing.  You’ll love it!  You have to _____.”  Fill whatever in there.  Sit at a café and people-watch.  Go to the Louvre.  Go to Rue Moufftard.  I did it.  And it was……ok.  Just ok.  It wasn’t this amazing city that I absolutely fell in love with.  It was ok, but not life-changing.  (Except for the cartwheel that I did in front of the Louvre, which I then repeated nearly 10 years later when I went back.)

And I hear the same comments about NYC.  “It’s amazing!  You’ll love it!  The shopping!”  So NYC has always been a “pass” in my books – it’s close, I could go with little trouble, but meh.  Let’s go to…Chicago instead.

But then a few months ago I received an email from Porter Airlines with a huge discount.  Buy one ticket, get the second free.  So the BF and I tossed around a few ideas – go back to Halifax?  We both loved it there, but we’d both been there a few times.  Chicago?  Could do.  Washington DC?  Also a possibility.  Then the BF suggested NYC.  And I thought….for $275, why not?  We could go for a long weekend.

So we went.  We booked a hotel with Hotwire – you get an amazing discount (we got a 2.5 star hotel on Central Park for $70/night) but the kicker is that you don’t know the name of the hotel, or the exact address (you know the area, but not which street) until after you book.  It turned out great for us – the hotel was small (80 rooms), clean and comfortable.  There were lots of restaurants around (and most were in the $15 – 20 a plate price range), and the subway was only 3 blocks away.

As always, there was a….situation….at customs.  I have never, in my life, ever, had a normal experience at customs.  Normal for me is something strange happening – not bad strange, I’ve never been detained, but strange as in “Well you’re wearing glasses, and in your passport you’re not!  Are you sure you’re you?  Have a good trip, miss”.

This time, it was my boyfriend going through in another lane from me, before me.  When he mentioned he was travelling with his girlfriend, the customs agent yelled out to me “Is this your boyfriend?  Do you want me to deport him?  I can you know!”  Yep – right there, in front of hundreds of other weary travellers, I’m yelling out answers to a border official.  From the line.  That’s my life. 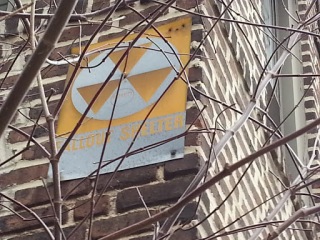 Anyway, once in New York we took the afternoon to wander the neighbourhood we were in.  We ended up having lunch/dinner at The Ellington (just found out it’s a newly opened bar!)  Good food, great staff, great beer – and they spelled draught right!  Straight to this English teacher’s heart.  We crashed after dinner, and didn’t wake up until 10:30 that night, so we decided to stay in, and rest up for the next few days.

Friday morning saw us up early, and out the door by about 8:30.  We picked up coffee and breakfast foods (egg sandwich for the BF and croissant for me) at Zanny’s Cafe on Columbus Avenue before heading to Central Park for a walk through.  Our ultimate destination was the Central Park Zoo, which we hit at about 11 a.m.

The zoo is small, but perfect for kids.  There are indoor exhibits (lizards and birds), and a few outdoor ones as well – namely the sea lions (who, it appeared, are always ready to play to the crowd), the polar bear, the snow leopard and the red pandas.  There’s also a children’s zoo not far away, and admission is included.  Bring plenty of quarters, to buy feed for the goats, pigs and alpaca.

After that it was a dash to Pier 6 on the East River, where we had made a reservation to take a helicopter ride over the city, with Liberty Helicopter Tours.  It’s $180 for a 15 minute trip, but it’s so worth it.  We flew over the Statue of Liberty and Ellis Island – actually we made two passes, so that both the righ-t and left-sides of the helicopter got a good view.  Then it was back down the East River towards the financial district, mid-town (and Time Square) and then Central Park.  The helicopter stays over the East River the entire flight, you don’t actually fly over the city, but it really is a lot of fun.  We definitely recommend it as an activity if you have the budget for it.

After the helicopter tour, it was a quick subway ride up to Times Square, where we got out and wandered around (so many people!), before heading to Empire States Building.  We opted for the fast track route, at $50 a person.  Big mistake.  It’s normally $25 per person, but you end up standing in an hour long line, so we though to by-pass that and go straight up.  It’s cramped quarters at the top, and it was windy and cold by the time we got there, after the Skyline Ride – a very 80s feeling explanation of the building, and then a “ride” where the seats move, as if you’re in an airplace.  I say give it a pass.

After that it was a quick rush back to the hotel to change and drop off our souvenirs, a quick rush to a curry house nearby for a fantastic spicy dinner, and then to Comic Strip Live for a comedy show.

Comedy shows are always hit or miss.  This time, the host was fantastic, the first comic was great, and the others….meh.  Some hits, some misses. We paid $15 each, plus there was a two drink minimum, again each.  It was worth it, I think – we had a few laughs at a comedy club in NYC, what’s not to like?

The next day, our last day, was a free day.  We had decided to not book anything, and just play it by ear.  This time we headed to Starbucks – not for their coffee, but their free wi-fi.  Good tip for travelling – if you need to look something up on the internet, and don’t want to pay through the dataplan, Starbucks is great for their free wi-fi.

We ended up taking the subway to Greenwich village, where we wandered around, before heading towards Chinatown.  About midway, somehwere in Soho, we decided to do it “pub crawl” style (it didn’t help matters that it was cold and windy again.  We wanted some place to warm up) so we popped in and out of pubs along the way, having an appetizer and a pint at each place.  We did hit Chinatown, but then promptly left.  The crowds of people were just incredible!  Memo to self:  Saturday around noon in Chinatown is crazy. 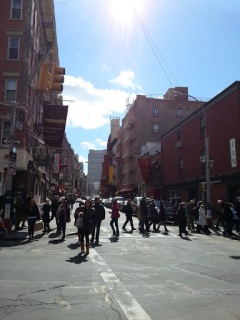 After that it was lunch in Little Italy, a walk to Noho, then back to Soho (then back to Noho, while trying to find a pub to stop in) before getting back on a subway to head to the hotel. 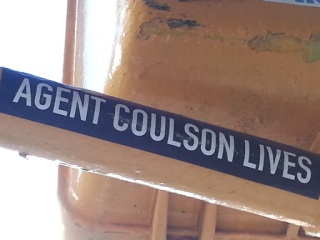 – Astor on the Park has thin walls, if you’re a light sleeper