Finally, after months and months, I was back in the Adirondacks with my climbing compatriot, for an attempt on Cliff mountain, and if we had time Redfield. 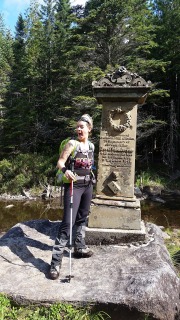 Now, we’re both currently a little out of shape.  There have been a few years where we’ve swiftly ascended mountains, like the year we did the Dix Range, but this is not one of those years.  This is one of those schlep yourself up the mountain years.

So we stayed at the Hoot Owl B&B in nearby Newcomb (our go-to accommodations for hikes at Upper Works) and headed out bright early for a 7:15 a.m. start.  The going towards Flowed Lands is very quick – the trail, while not ‘flat’ is even – i.e. there are a few rolling ups and downs, but the trail isn’t covered in rocks, boulders, logs, branches, etc.  (This is actually great on the way out when you’re tired – you can just put one foot in front of the other and not have to worry about tripping over a root that is hiding in plain sight.) We made fairly good time, hitting the monument at Calamity Pond around 9:41 a.m., where we took some photos and chatted with a couple who were hiking in for an overnight stay.  From the monument, it was a short walk, about 20 minutes, to Flowed Lands, where we stopped again to soak in the beauty, have a snack, and rest our feet.  We thought this would be a great destination for a hike in and of itself – it was very quiet and peaceful, and other than the couple that had met at the monument, we didn’t see anyone else until we were ready to leave.

From there, the trail started to get a bit rougher, with rocks and branches waiting to trip us up.  We walked around the Flowed Lands, and towards Colden Dam, a first for us.  After 15 minutes, we came to the junction with the Uphill Trail.  The name is not misleading, the trail at this point was a bit steeper, and with a lot more rocks impeding a quick pace (for us.)  We stopped by the suspension bridge (closed due to a cable giving way, and hanging precariously over the river) before continuing on, coming to the trail junction between Cliff and Redfield about 4 and a half hours after starting.  At this point, we knew that we wouldn’t be able to do with peaks, so we decided to hike the harder one – Cliff.

We started up the trail, immediately encountering mud.  But, having done the Couchie bog the year before, we just powered through – we knew our boots were water-proof.  We quickly hit the first of the cliffs for which Cliff gets its name.

The cliffs weren’t too difficult, providing easy foot holds and hand holds, and were easy to scramble up, at least in the beginning.  The higher we climbed, the harder the cliffs became.  Near the beginning our of 46er journey, Steph and I climbed the cliffs of Saddleback, and after that, these cliffs were easy-peasy.  A few spots where you had to hold on with your fingertips, monkey swing around trees, and boost yourself up over ledges, but nothing that I would classify as scary (and I’m terrified of heights.)  Of course, takes this with a grain of salt – YMMV (your mileage may vary). 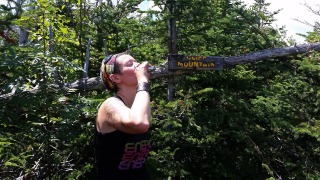 We finally summited Cliff at 1:46, six and a half hours after starting our hike.  We had our traditional swing of whiskey (from a metal flask, no glass for us), some lunch, and took some photos, before heading back down.  The cliffs were just as hairy going down as they were up, although we both decided to butt slide where we could, lowering our centre of gravity and reducing falls.

We made good time out, taking some time to relax on Colden Dam and chat with other hikers, enjoying the late afternoon sun, and the view of the mountains. We finally got up and continued hiking, hitting the parking lot at 7:59. A long day, but a restful one.  We had decided to enjoy our hike, and enjoy the Adirondacks, rather than race to get to the summit and back.