Seeing as the BFs (ooooh, now fiancé! I should start using that) birthday, and mine, are five days apart, this year we decided to head to New York City for a weekend.

We’re lucky because the Fiancé can take time off whenever he would like (within reason – it can’t interfere with deadline work obviously), and I have a schedule where I’m off every Friday afternoon. So we booked a flight leaving around 2 pm and landing in NYC around 6 (after a layover in Toronto).

We flew into Newark, which we’ve done before. While a little out of the way, it’s extremely easy to take public transit into the city. There’s a rail link with NJ transit that costs $13USD, and takes about 25 minutes.  The train stops at Penn Station, and from there you can transfer to the subway.

This time we were staying in Long Island City, just across the East River from Manhattan. We had booked our hotel with hotwire.com, which we’ve used before. We ended up at the Boro Hotel, which was lovely. While the room was small, the floor-to-ceiling windows, along with bare wood floors and white linens, made it seem light and airy. The bed was comfortable, and the floor quiet – we never heard any of the other guests. We also had a small balcony off the room.

The hotel provided breakfast for the guests each morning.  It consisted of muffins, pastries, Greek yogurt, fresh fruit, granola and toast, as well as coffee and juice. While we enjoyed the breakfast, I was glad that we would only have two, as the choices seemed like they could get a little boring for much longer.

The hotel was one subway stop away from Manhattan, so Saturday morning after breakfast, we headed over to Central Park. We wandered through the park, stopping to watch the skaters on the ice rink (which was weird, as the temperatures that day hit about 10C) before making our way to the Museum of Natural History.

We’ve been to NYC four times, and this was our first visit to the museum. The entrance fee was $22, and can be bought from a kiosk just inside the doors. It was a madhouse in the entryway, and at no point did we have to show, scan, or otherwise validate our ticket. (Honestly, we probably missed a line somewhere for that). Our first stop was in the African Mammals exhibit. Seeing as we’re going to Africa in only a few weeks, you would think we wouldn’t have spent a lot of time there, but it was interesting to see the recreated dioramas of the wildlife and vistas.

After that, we headed into the African peoples exhibit, then to the top floor to see the dinosaur exhibit. We first wandered through the rooms with mammal skeletons, before heading into the dino rooms. From there we headed to the third floor, to see more of the African mammals. At that point, we were getting a little overloaded with information (and to be honest, people) so after a detour through the museum shop, it was back outside. 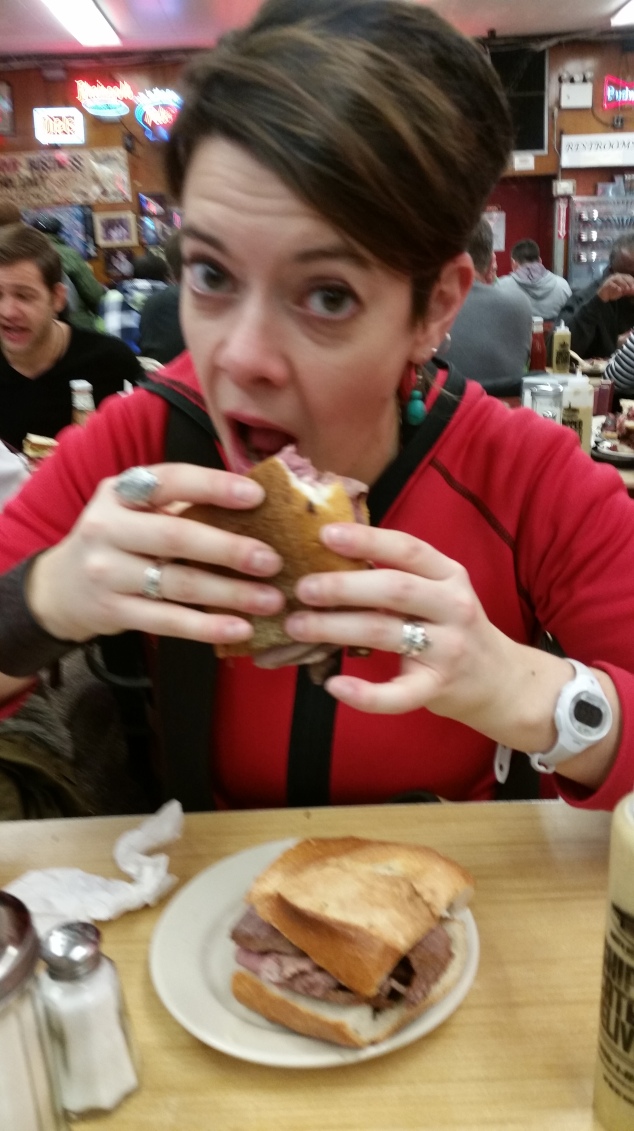 We headed down towards the East Village, popping into an Irish pub for some lunch and pints first. We went in and out of shops as we winded our way through the streets. We found a Christmas shop, selling old fashion ornaments from the 40s and 50s, so we popped in to pick up a few. We eventually made our way to Katz’s Delicatessen, where we joined the throngs of people buying smoke meat sandwiches. We were lucky enough to snag a table, so we sat down to enjoy our massive sandwiches. We could only finish half, so we packed up the rest to have for dinner later at the hotel.

The next day we tried to sleep in, knowing that it would be a late night, as our final flight home (from Toronto) was just after midnight. We took a walk around Long Island City and Astoria, eventually ending up in Socrates Sculpture Park, before heading to the subway, and getting off at Canal street. We meandered around, having lunch at the Lafayette Café, and then to the Brooklyn Bridge.

We got to Penn Station around 4:30, and had to wait a few minutes for the train to arrive. They don’t announce what track until the train is actually there, and then it’s a stampede as everyone tries to get on. My advice is to aim for one of the cars further up – most people try to get on the first car or two, so you’re more likely to get a seat if you keep walking along the platform.

At Newark, we stopped in at Art and Lounge, the lounge available to Priority Pass members. We had some dinner, and sat in chairs far more comfortable than the ones at the gates. We also had better food, and unlimited drinks, as well as wifi. Well worth the $99 sign-up fee, and $54 to access the lounge ($27 each)

Our flight to Toronto was uneventful, but unfortunately we had more than enough adventure on our flight to Ottawa. The flight was delayed by a half hour because of a faulty starter (basically.) After being checked out by mechanics, the plane was manually started externally, and we were on our way. We arrived in Ottawa at 2 am, were home and in bed by 3, and alas – I was up at 6 am to go to work. The fiancé was lucky enough to sleep in until 8:30!