I’ve gone whale-watching out of Reykjavik (August) and Husavik (early May). The first thing you need to know is it is highly unlikely that you’re actually going to see a whale – as in, a humpback whale breaching the water and the wonderful tail fin that you see in photos advertising whale-watching. That’s just probably not in the cards. What you are likely to see is the back fin of a whale as it slowly crests in the water. Very anti-climactic.

But anyway. I saw minke whales, and a tiger shark, while out from Reykjavik. In Husavik, we saw a blue whale (it breached several times over the course of about an hour.) So you’ll get to see something, just….not what you might be imagining you’ll see.

The back fin of a blue whale

If you have time, and you’re going to be up north, and you still want to go whale-watching, I’d recommend Husavik over Reykjavik. (That’s not to say that whale-watching out of Reykjavik is bad, it’s just busier – more boats, freights, ferries, etc – so the chances of seeing something big are a bit lower.)

In Husavik, we were given enormously thick and warm winter suits – think an adult-sized onesie designed to keep you warm outdoors – because it is cold out on the Arctic Ocean in late April. The boat we were on was on the smaller side (although not small – I had no fear of waves sweeping me overboard) and had no ‘indoor’ portion – we were out in the elements for the entire two to three hour trip. We headed out over the open water, to an area where whales are known to feed, and luckily found a blue whale. (We were a little early in the season for whales) We watched the whale breach a few times, before heading back. On the return trip we were given hot chocolate, and a cinnamon bun type pastry.

For people who get motion-sick, I really really really suggest taking some kind of motion-sickness pill. Ross got a little sick on the trip back, and couldn’t enjoy the hot chocolate or pastry (I, however, got to enjoy twice as much!) The water can get choppy, so it’s a good idea to have something with you. 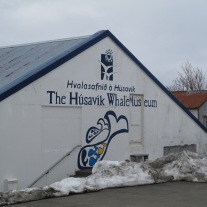 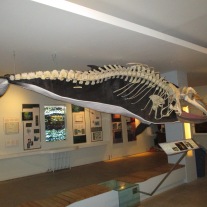 Inside the whale museum

Before or after whale-watching, you can pop into the Whale Museum, located near the harbour. Inside you’ll find lots of information about the whales found around Iceland, the ocean, and even several whale skeletons displayed. The museum isn’t large, but it does have a second floor where most of the skeletons are located. Well worth a visit.

Another museum located just on the edge of town is the Husavik Museum, also known as the Culture House (or was when I was there in 2013.) Much like the Skogar Folk Museum, this museum gives the visitor an idea of how people lived in this whaling community. There are also stuffed examples of various mammals found in/around the area (including a stray polar bear). 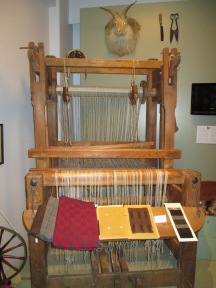 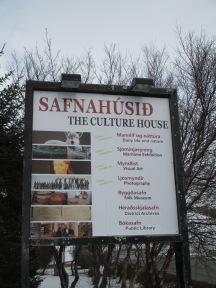 If you’re staying in Akureyri and don’t have a car, you can easily take the Straeto bus to Husavik. Route 79 takes you straight there, in just over an hour. The bus stop in Husavik is near the harbour, making it very easy to find your way around. (Not that the town is so large that you could get lost). You’ll have time to go on a whale-watching tour, see both museums, tour the town, have something to eat, and catch the bus back. (I should note that there is apparently another museum in Husavik, the Exploration Museum, but I didn’t get there so I can’t speak to it’s worth as an attraction.)

And as a final note: Back in Reykjavik, the whale-watching was slightly warmer, which isn’t surprising because it was in August. The boat had an indoor, heated section, which was great because it started to rain on our way back to the harbour. If you’re only in Iceland for a short period of time, or you don’t have enough time to detour off the Ring Road to Husavik, and you still really really want to go whale-watching, you can still have an enjoyable trip out of Reykjavik. The harbour is close to the downtown core, and you can just pop by to go on a tour.

Whale watching out of Reykjavik

3 thoughts on “Whale-watching in Iceland: A Day Tour of Husavik”